Editor's Note: Supernatural often inspires its fans to express themselves artistically. Fan videos are one such creative outlet. This week we are excited to share with you an article written by a Guest Writer who found videos that emotionally reflect "The Werther Project" and the Always Keep Fighting campaign. We hope you enjoy this musical interpretation of Supernatural's most recent messages.---


This weeks episode, "The Werther Project", tackled the theme of suicide. Before the episode had even aired, Jared Padalecki and the writer warned the fans about the episode containing that theme because it might be too much for some viewers.

"Jared Padalecki @jarpad  ·  Apr 22
Tonights episode is the one I filmed during the first #AlwaysKeepFighting campaign. Its content deals with suicide. #SupernaturaI"

"Bobo Berens @robertberens  ·  Apr 20
As you may have guessed from @jarpad's awesome #alwayskeepfighting campaign, this Wednesday's all new #Supernatural deals with suicide. It's 1 element among many. But 4 those for whom that theme--and macabre representations of that theme--might be too much, this is a warning."

If you think about Supernatural and what Jared's campaign "Always keep fighting" is all about, you might see that the brothers are not new to the thought of depression or even suicidal tendencies. Their father John offered his life in a deal to keep Dean alive. The deal he made was taking his own life even if it was not by his hand. Dean did the same for Sam. Dean's arranged suicide had a time limit and his death almost caused Sam to follow the same route. When Dean died, Sam was in a swirl of depression and he was hitting the bottom fast.  He admitted to Dean that Ruby saved his life and that he wouldn't have been alive without her.

During the ten year run, self harm and suicide has lifted it's ugly head many times through words or just lingering in the backround. It was often with the brothers but also with other characters like Ellen and Bobby. In this episode it was again with Sam and Dean.

In my real life I have also been affected by this matter with friends and family. Some have been saved and some have been lost. This episode was also strong for me because I knew what work Jared was doing before, during and after the episode. He got support for the cause from people all around him like Jensen, Travis Aaron Wade who played Cole and people around the world. He also continued "Always Keep Fighting" with Jensen.

He mentioned the following in an interview:

"Maybe a lot of people don’t know this, but Season 3, we were shooting an episode, and I went back to my trailer to get changed and just kind of broke down.A doctor came to set and talked to me for about 30 minutes or 45 minutes and said: “Jared, I think you’re clinically depressed. I think I should write you a note and we can shut down production for five days and then we can take it from there.” And it kind of hit me like a sack of bricks. I mean, I was 25 years old. I had my own TV show. I had dogs that I loved and tons of friends and I was getting adoration from fans and I was happy with my work, but I couldn’t figure out what it was; it doesn’t always make sense is my point. It’s not just people who can’t find a job, or can’t fit in in society that struggle with depression sometimes.Luckily, two of my great friends, Jensen who everybody knows very well, and my friend Kelly who I work with, came to my trailer to check in on me and talked to me for probably an hour or so and then, I was like, “All right guys, I’m going through a tough time right now. I don’t know what it is, but I’m just going to keep my legs moving. I’m going to keep fighting.”

“On New Years Eve, my dear friend lost his battle with depression. This, unfortunately, wasn’t the first time I lost a personal friend to suicide, and it hurt me deeply…”


Now, by this long introduction, I move to video(s) that I think fit perfectly with the suicidal thoughts of both brothers in "The Werther Project":

The first video is from Dean's point of view, by ash4897:

The second video is from Sam's point of view, by JShomphe:

Listen to the lyrics and the voice. This song fits both brothers so well.

All I can say is Always Keep Fighting Sam and Dean. Always keep fighting.

The song "Hurt" is a song written by Trent Reznor. It was first released on Nine Inch Nails' 1994 album: The Downward Spiral. It received a Grammy Award nomination for Best Rock Song in 1996 but it didn't win. "Hurt" was rerecorded by Johnny Cash to critical acclaim and you can definitely hear the reason for that. The song was one of Cash's final hit releases before his death September 12, 2003 at the age of 71.

# Lilah_Kane 2015-04-26 04:33
I had a lot to write to this one. I guess Jared's campaign had a momentum when he mentioned this episode. I listened to bot song versions and Johnny Cash's went straight under my skin and to my bones. Glad you liked them!

# LEAH 2015-04-25 22:35
That was really nice Lilah. Great videos! Love that song. Always Keep Fighting is an awesome charity, movement and message. Thank you Jared for the wonderful idea. Thank you Jensen for joining forces!

# Lilah_Kane 2015-04-26 04:44
I loved the song too and yes "Always keep fighting" is all what you mentioned. Jared really listens to people and he is so into the cause and now he has Jensen to back him up. They regularly update their facebooks about it. 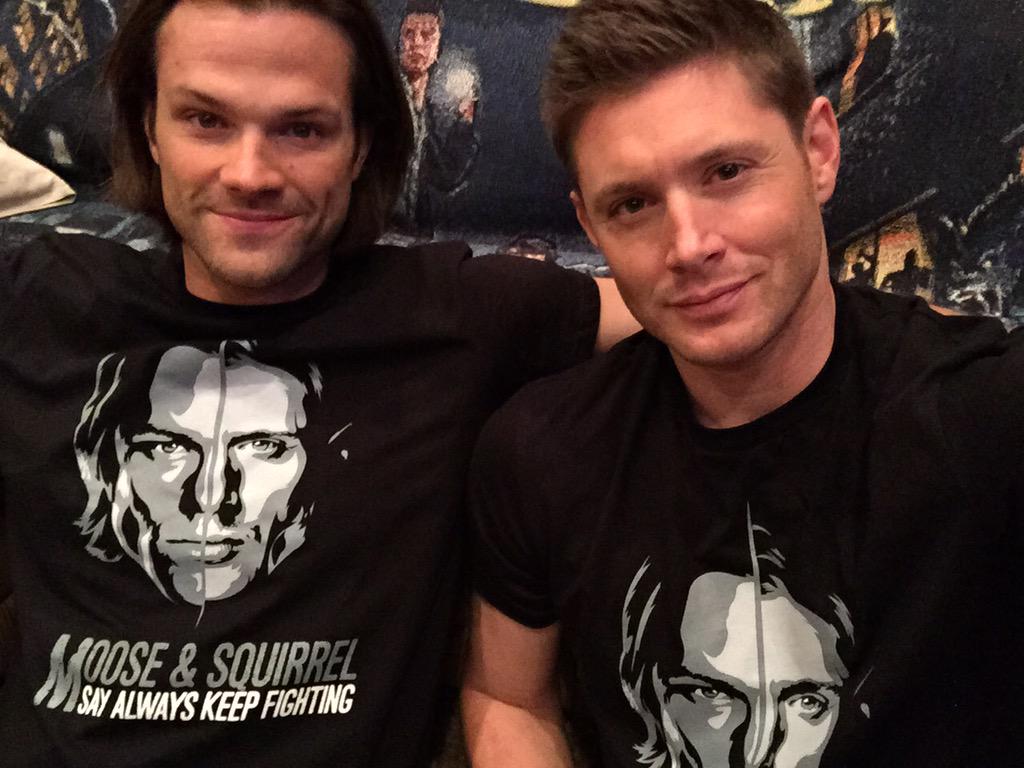 # Barbara Maake 2015-04-26 07:57
The message "always keep fighting" is particularly meaningful to me. My mom was bipolar, as is my brother. Having witnessed the depths of despair that my mom went through, while we all felt so damn helpless, you realize that just being there to support and encourage a depressed loved one can help get them through even the darkest times. God bless Jared and Jensen.

# Lilah_Kane 2015-04-26 13:30
Jared has touched many people with the campaign and now he has also Jensen joining it. Always keep fighting is good because it is for those that are going trough hard time but it is also for those that are around them. Thanks for reading I do hope things got better for you all.

# YellowEyedSam 2015-04-26 15:28
I've had depression in the past. I had a major panic attack many years ago that left me with 6 months depression (weirdly I had one week break of pure happiness) . Thankfully my family were there for me <3

Oh and I was feeling down last year until I found Supernatural. I became transfixed by it and became (still am) a huge fan banishing that short bout of mild depression. Now I'm making videos and writing fanfics of the show!

Anyway, where's the beanie? I want a beanie with moose on it

# Lilah_Kane 2015-04-26 16:14
Supernatural got me writing also again after a long while and it is something I have always loved to do. You'll never know what and where can give you a boost for you to do something or help you in a good manner. Thanks for reading!

# LEAH 2015-04-26 16:37
Thanks for sharing that YellowEyedSam. I have been watching Supernatural since near the beginning. I feel so lucky to have had this show to look forward to for a decade of ups and downs in my life! I will forever have love for this show and those incredible actors because of that.

# Barbara Maake 2015-04-27 17:22
I'm so glad that SPN helped you get through a rough time. I know you write fan fic, but what sort of videos do you make about SPN? Musical montages like these?

# YellowEyedSam 2015-04-28 04:31
I've already done one of these so called "crack vids" and working on a 5 minute musical montage. I wouldn't recommend that length though. Despite nearly finished there's still a lot of fine tuning xD

p.s Samandean10 I sent you a message. Did you not get it?

# Barbara Maake 2015-04-28 15:56
OK maybe I'm being dense but I can't find it. I looked under the only discussion thread started by you and it wasn't there, and none of the other threads seem likely places for a message. Steer me in the right direction because I'd love to read your message.